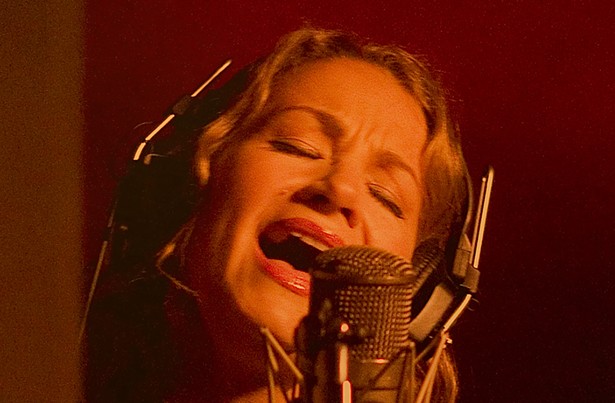 Sure, she became a household name in the ’90s with a song about God Being One of Us and pissed off a bunch of pious people (but thrilled the rest). The single, however, was hardly an example of its searing, biting chops and deep groove tendencies. The Kentucky-born singer-songwriter never left. Heck, she’s barely taken a break in the past 25 years since her Grammy-nominated debut album “Relish” dropped.

Since then, she’s produced a record for the Holmes Brothers, hit the festival circuit supporting the Dead and Phil Lesh and Friends, jammed with gospel legend Mavis Staples, and formed a supergroup, Trigger Hippy, with guys by The Black Crowes. And that’s just the beginning.

A cleaning spree tied to the pandemic hiatus led to Osborne’s latest release, “Radio Waves” (Womanly Hips Records), a collection of live performances from studio sessions at beloved stations like KROQ and KCRW that showcase her powerful voice and impressive career.

Recently, Style made her want to catch up before her concert at Tin Pan at RVA, to see what’s going on and what to expect when she takes the stage for the first time in a long time.

Style Weekly: You’ve been making music for over 25 years and “Radio Waves” is a very diverse collection of songs that contains deep cuts from yesteryear. How the hell do you start the process of picking and choosing which of your kids will make the cut?

Joan Osborne: It’s really strange. Like many people, I was at home during COVID. Unable to get out or drive. I just started cleaning my house from top to bottom. I discovered so much material in the back of a closet. I found all these boxes full of old CDs, tapes and files. I started listening to them and realized how high quality some of them were.

We were on tour, playing a few songs live on a radio station – and at the end, more often than not, the engineer would hand me a CD or tape of what we had just done. Back then I would just put them in a bag or box and forget about them.

The process was the same as when you make a record; you don’t take out everything you have. This is to make sure the record as a whole is cohesive and works like an album. That was the guiding principle of the choices we made with this one as well. It could have played out a number of different ways, but we picked a few favorites, tent items if you will, and built the collection around that. There is still so much material [she laughs].

Other than a total purge and deep clean, what else have you done in the past two years?

I wrote a little, but I also took the opportunity to get into other things. I started working on developing a TV show with my friend, Jill Sobule. It’s not a done deal or anything, but people seem very interested. It’s also nice as a mother to be more at home with my teenage daughter. She’s not going to be staying in the house any longer, so being able to have a more normal home life where I’m not flying away every couple of months has been really great.

What are you most looking forward to when you come back in front of a live audience, because you came out in 2020 and I guess you weren’t able to do this tour [material]?

Yeah, we really couldn’t get the “Trouble & Strife” tour the way we wanted to because, just when things started to open up again, here comes delta, then omicron. There’s a desire in me and the guys in the band to play some Radio Waves stuff, but also that one because a lot of people haven’t heard it live yet. The few times we’ve done it live, it’s been going so well. And it’s always nice to have new, original stuff to play. Super excited about it, but also to dive back into some fan-favorite stuff from “Relish.” I just got out, honestly. I really don’t think there’s anything like the live music experience. It’s great to do a Zoom concert or whatever, but it’s not the same as being there in person. Were excited.

You’ve been an activist all your life and now you’re also a parent. How have you navigated the turmoil of the past few years, both for you and your daughter?

Going back to 2016, when the presidential election surprised so many of us: I sat there watching the results come in with my daughter, expecting a very different outcome. And I was aware that she was watching [me] and my partner to see what we would do if something didn’t go our way.

I said to him, “Here is what you are doing. You try to help those who need your help. Yes, you are disappointed and appalled, but that doesn’t mean you don’t have a responsibility to be a citizen and participate.

We have done many things that ordinary citizens can do. We went to protests, wrote letters, called representatives, and donated money to organizations that were doing great work. But as someone who has some sort of public platform, I really used that experience as an impetus to write more political songs than I had ever written. So it became “Trouble & Strife”. It’s a response to the chaos we’ve all been through, not just COVID, but everything that came before it.

You talked about it, but music can really heal. Especially the live music, that feeling of being with others and being present in the moment.

Given that we live in a time where we are so polarized, family members don’t talk to each other, neighbors or friends insult each other on social media, everyone is in their own corner and defends it so heavily…I I feel like live music is one of the few places where community members can come together. They don’t have to think of themselves as red or blue or what their opinion is about this or that, but as human beings enjoying this primordial experience of listening to music together in a room. I think those opportunities are rare in today’s world.

Your repertoire is incredibly diverse, incorporating everything from blues to folk to Americana, the list goes on. Is there a genre that stands out as having taught you something important or shaped a musical memory?

Definitely blues and roots music. It really helped me as a person. I tend to live in my head a lot and try to connect to the world through my intellect. You can’t rely on that when you’re making music like blues, soul, or country. It reaches your heart.

If you’re a singer, you also use your body to connect to this thing on every level. It is an intellectual thing, but also an emotional, physical and spiritual thing. This kind of expressive music has unlocked parts of me as a human being that I wouldn’t have been able to access otherwise.

We’d be remiss if we didn’t talk about the ’90s, a time when you really hit the big time with Grammy nominations, controversies, all the merchandise. The 90s are back. What do you think of some people who might hear your music for the first time?

Fortunately, we have the technology to preserve music. I think about that all the time. I’m sitting in my house and I’m pulling out a Billie Holiday record and I’m thinking – ‘wow, I can be in my house and conjure up the spirit of this woman who died decades ago and listen to her intelligence and her genius like she was here. ‘ Although I love live music, that’s a good thing about recorded music. You have access to the past, especially with the Internet.

I think it’s only natural that if an era becomes popular again, people would go find what’s just left there. There was definitely a quality to the things that came out in the 90s, especially the singer-songwriter stuff. You don’t hear that on pop radio today. It makes sense that when people hear it they think it’s cool or different. The book speaks for itself.

Finally, what would people be surprised to know about Joan Osborne?

Let’s see. I don’t have many deep dark secrets. At least not that I’m going to tell you [laughs]. I’m a really good dancer, not trained or anything, but I can cut a rug on the dance floor. I love doing this.

Joan Osborne plays the Tin Pan on Saturday April 2. Doors at 6 p.m. and the show starts at 8 p.m. Tickets are $50. For more information, visit tinpanrva.com.


2022-03-31
Previous Post: The ever-unpredictable Grammys face new surprises
Next Post: Musicians are turning to NFTs in search of new profits