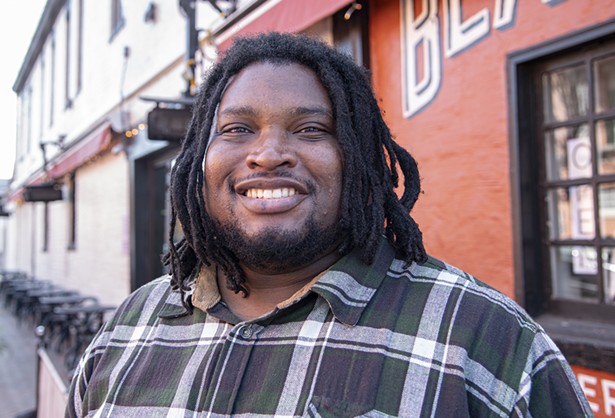 From a sea of ​​empty seats to a standing ovation in one hour. It was, in a nutshell, the experience of the Richmond Folk Festival 2021 for Justin Golden.

The Richmond-based blues singer-songwriter and fingerstyle guitarist performed on a wet Saturday afternoon last October with his stacked backing band The Come Up and a list of songs he was just waiting for the right time to burst. outside. What a time it was. After watching the crowd from the previous act break free, Golden brought the Virginia Folklife Stage to life.

“It was unreal,” Golden says. “We settle into a completely empty tent. And then suddenly I look up and there is no seat in the house and people are standing as far as I can see. I felt like it was a good start.

Many of the songs he shared at Folk Fest will make their studio debut on Golden’s album, “Hard Times and a Woman,” which will be released April 15. This is not his first collection; dedicated fans have been shooting the CD-only EP “Hard Times” since 2019. But with his next feature, Golden takes a powerful personal step into the spotlight.

For help painting such an authentic portrait, Golden turned to longtime The Come Up collaborator and bassist Chip Hale. The two met while students at Longwood University around ten years ago, when Golden began writing and performing. “He’s been there since probably my very first gig,” Golden says of Hale.

This comprehensive view of Golden’s creative arc came in handy during the pre-recording process for “Hard Times and a Woman.” For three months in late 2020, before heading to Lance Kohler’s minimum wage recording facility for the official follow-up, Golden and Hale made numerous demos at Hale’s home studio, balancing experimentation with excavating established styles and Golden’s sources of inspiration.

“We really worked hard on the sounds,” says Golden. “[Hale] he has all the pedals, he knows all the sounds, and we could try things out. We were self-aware – not changing my sound too much, but taking a logical step forward.

Moving forward, a big part was making sure the diversity of his influences didn’t get left behind. Golden made a name for himself as a standard-bearer of traditional blues: mastering finger-picking patterns, transcribing old songs that might otherwise be forgotten, helping start the Roots Rhapsody Project music education program in Richmond, and is studying to become a mentor – both within the United States and abroad – through the Ethno music programs sponsored by Jeunesses Musicales International. But Golden’s outlook is not retrospective.

“I’ve been really into the world of acoustic blues for a long time,” he explains, “and I don’t always write songs like that…Sometimes it comes out [in the style of a] singer-songwriter. Sometimes it comes out a little jazzy. I was like, ‘So what do I do with this? I’m not just trying to cultivate this whole image of being this hardcore bluesman. I want to be my own writer.

He also pushes back against the assumption that success as a blues musician means making waves as a lead guitarist.

“It’s hard to fit in in this world where everyone wants you to rip leads all the time,” he points out. “I just want to sing the song and build it with the people around me.”

Golden forges an individualized path based on the abilities his bandmates bring to the table. He brought in Chip Hale as producer for “Hard Times and a Woman,” a move that Golden says took a weight off his shoulders. Vocal arrangements for the album were provided by Come Up keyboardist and accomplished singer-songwriter Tyler Meacham. (Meacham just released his own LP titled “Into the Fray.”) By amplifying what others have to offer, Golden also has more to offer.

“It gives me so much more room as a singer,” says Golden. “I think when I’m playing solo, having to do all the work takes me a bit away from both things – playing guitar and singing…Having the whole band there gives me so much room to expand. ”

Golden took an equally broad view of the genre he is known to work in. In fact, it’s written in the title of his new album. “I watched an interview with an old bluesman, and he said, ‘The blues is nothing but bad luck and a woman.'” That definition stuck with Golden, and she renewed the sense of creative freedom.

“The blues doesn’t have to be twelve or eight bars,” he notes. “It can be something with the blues like the emotion that makes it a blues song.”

The variety of textures on “Hard Times and a Woman” range from the picky country blues in “Moon Far Away” to the catchy fuzziness and pop of “If I Keep It Together.” Yet the songs are woven together by an ever-present desire. Sometimes it’s out of love: “There’s just something about your soul / And I keep wanting it,” he sings in “Lightning When She Smiles.” Other times it’s for stability: “I can’t make it / but honey, I hope you know I’m trying,” he confesses in the chorus of “Can’t Get Right “, released as the album’s second single.

The search for balance is also at the heart of the album’s first single. “Ain’t Just Luck” is about dealing with the devil, and while the metaphor might be considered standard blues fare to a casual listener, it holds a real and heartbreaking place in Golden’s creative life.

Golden has spent years carving out a niche in his life for music. He left behind a fulfilling post-graduate job as an archaeologist so his schedule could be more predictable and book gigs. In his current job in the mortgage industry, he can work from home – a fashionable gold award for the flexibility it offers. In between, he was in a nine-to-five office environment. The exchanges involved weighed heavily on him then.

“At that time,” he recalled, “I was like, ‘I’m selling my soul to do the best I can later.’ Because financially, of course, it’s very expensive to make this type of record, and then to be able to have the flexibility to go on tour and to take the time, you have to make these sacrifices somewhere.

Although he wonders what path he hasn’t taken watching friends and other local artists advance their careers in recent years, “Hard Times and a Woman” is an indication that he is points in the right direction.

“I really had to take each day as a new step to build it all up to present it as it comes,” he says. “I think I made the right choice, but I also feel like I lost years… If I had had more trouble on the road, maybe I could have made it this far , but it is a compromise. It’s definitely a day-to-day compromise.

“Hard Times and a Woman” will be released on April 15. The second single, “Can’t Get Right”, is out now. Justin Golden and The Come Up will perform with Devil’s Coattails on April 9 at Fuzzy Cactus. For tickets, visit Eventbrite.