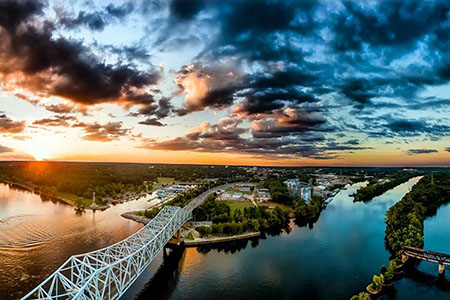 The Shoals: Still Making Music After All These Years

(Above) Aerial view of Florence and The Shoals. Photo courtesy of Florence-Lauderdale Tourism. (Click on images to see larger versions).

16 Aug 22 – According to legend, Native Americans along the Tennessee River in northern Alabama believed that a woman who lived in the river sang to them. They called the waterway the “singing river”, and some said it led the souls of the deceased to a peaceful afterlife.

Generations later, coincidentally or not, the area known as The Shoals is hailed as the hit recording capital of the world.

It all started in 1959 when music creator and promoter Rick Hall opened FAME Recording Studios in Muscle Shoals, one of four small towns that make up The Shoals just south of the Tennessee-Alabama border. (The others are Sheffield, Florence and Tuscumbia.)

The Alabama Music Hall of Fame in 1985 dubbed him the “father of Muscle Shoals music” upon his induction. He received a Grammy Lifetime Achievement Award in 2014, four years before his cancer-related death.

In 1969, Hall’s in-house rhythm group, affectionately nicknamed “the Swampers” by Lynyrd Skynyrd, went on his own to found Muscle Shoals Sound Studio in nearby Sheffield. Check your retro vinyl collection and you might have Cher’s solo debut, 3614 Jackson Hwy. This is the address of the studio. The cover of the 1969 album, commercial failure but critical success, features the multi-talented artist, Sonny Bonoand accompanying the musicians in front of the modest stone building and its emblematic sign.

The Shoals thrives today with a blend of artistic expression, culinary excellence, historical treasures and Southern pride. You will find a rare Frank Lloyd Wright-designed house and birthplace of the deaf and blind Helen Kellerwho led an extraordinary life.

Designers and manufacturers of all kinds have established themselves in the region, including high-end fashion entrepreneurs Nathalie Chanin and Billy Reid. Studio 23 is a gallery showcasing talented artisans and creatives from across the region.

The sounds of music are everywhere – in clubs, bars, stages, festivals and recording studios. For the Native American woman singing in the Tennessee River, I’m sure that’s a heavenly thought.

Why is it called Muscle Shoals?

It’s a reasonable question, and even the tourism people who host you admit they don’t know for sure. Shoals are long, narrow, submerged ridges of sand that accumulate in shallow water like parts of the meanders of the Tennessee River. “Muscle” could be a misspelling of the ubiquitous mussel shells along the banks, or a reference to the physical strength needed to navigate the river upstream, or something else entirely.

I can’t fix this, so let’s move on. Here are some of the sights, sounds and flavors that await you at The Shoals:

FAME Recording Studios and Muscle Shoals Sound Studio, less than three miles apart, are active recording studios that offer public tours. Both are compact, mundane, time-worn spaces, but the memories are huge. The walls are gilded with historical album covers, photos and autographs from some of the greats in the business.

Many artists prefer to come to work at The Shoals because of its location away from crowds and paparazzi, he added.

The Swampers and Muscle Shoals Sound Studio eventually moved to a larger space, but returned to the studio’s original location in the early 2000s as a renovated non-profit museum and recording studio.

Born in Tuscumbia in 1880, Helen Keller was blinded and deafened by an undiagnosed illness before her second birthday. With the help of his teacher and companion for most of his life, Anne Sullivan (called the “miracle worker” in the 1962 film of that name, which won the Oscars for Anne Bancroft like Sullivan and Patty Duke like Keller), she graduated from Radcliffe College, wrote more than a dozen books, and became a beloved international champion of disability rights and humanitarian rights.

Highlights of the tour include the cabin where Helen and Sullivan lived together, and the pump where Helen learned her first word, “water,” and the world of communication suddenly opened up to her.

Built in 1939 and extended for the growing family a decade later, Frank Lloyd Wright’s Rosenbaum House in Florence is one of his first Usonian homes. The streamlined, low-slung “prairie” styling that blended into its natural surroundings was the architect’s vision for a middle-class lifestyle and a design classic today. The meticulously restored Rosenbaum House, featuring Wright-designed furnishings, is the only one of his buildings open to the public in the Southeast.

The state’s most notable musicians of all genres are honored at the lavish Alabama Music Hall of Fame in Tuscumbia. In the rising rotunda are portraits of those who have been inducted since the first five in 1985. Among them are Blind Boys of Alabama, Nat King Cole, Jim Nabours, Lionel Richiethe Swampers and Dinah Washington.

Record your own song in the on-site studio.

A richly landscaped urban park adjacent to Claunch Cafe (keep reading for my lunchtime recommendation), Spring Park in Tuscumbia wraps around a scenic pond outfitted with a 50-jet fountain choreographed to lights and music.

Title sacred tears and created by Birmingham artist Branko Medenicait is a memorial to the tribes of the southeast whose forced removal by the United States government led them along the road known as the Trail of Tears.

Dining at The Shoals is a cultural experience as well as a taste delight. The offerings are legion, from country to cosmopolitan and their combinations.

The 360 ​​Grille is an upscale revolving restaurant located atop the 20-story Renaissance tower of the Marriott Shoals Hotel in Florence. It is the only revolving restaurant in Alabama. The menu is packed with premium beef and craft cocktails, and the views are scenic. Be decadent and enjoy the flourless chocolate torte.

At the modest Claunch Cafe in Tuscumbia Spring Park, the signature dish is the pecan chicken salad plate, served with lemon tea bread and something pink and delicious called “frozen fruit delight.” The plate was included in 100 Foods to Eat in Alabama by the Alabama Department of Tourism.

Odette in Florence is an upscale neighborhood restaurant with a rustic-chic vibe and a menu of New American dishes with Southern and global flavors. The ingredients are local and seasonal.

On the menu, around fifteen beers on tap and in cans, as well as a root beer made from Louisiana sugar cane. During the pandemic, the brasserie has switched to hand sanitizer but is now ready to serve you a drink.

The GunRunner in Florence is a ten-room boutique hotel dressed in architectural remnants of the historic building’s former lives as a pawnshop and car dealership.

The 24-room Stricklin Hotel, a former commercial building, offers boutique accommodation on two floors above the Big Bad Breakfast in Florence. In the basement there is a vintage bowling alley and a high-tech gaming area.