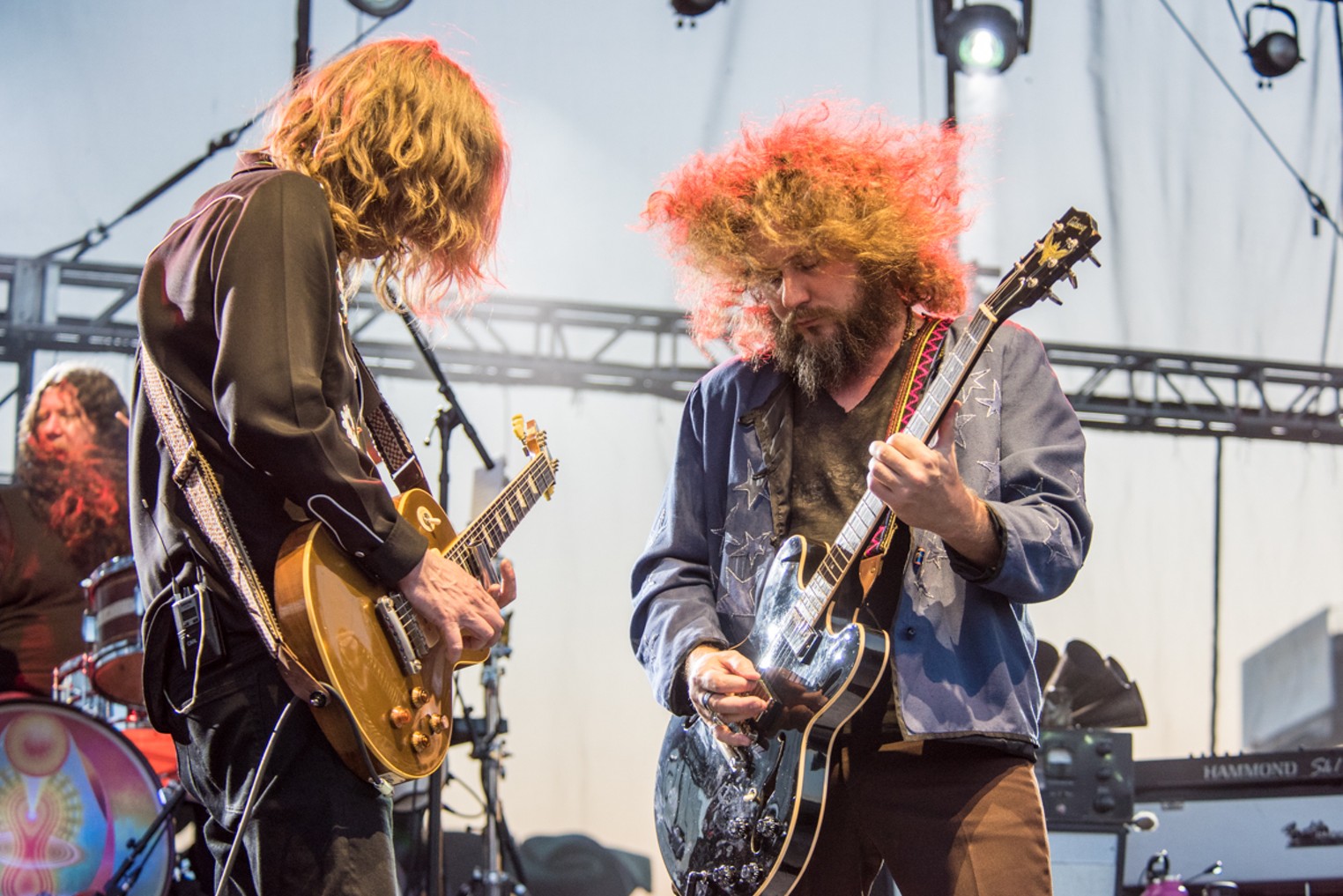 It was a perfect evening for a midweek gig with My Morning Jacket on the Lawn at White Oak Music Hall. Chamber of Commerce weather of 76 degrees, clear skies and a light breeze provided a great backdrop. The band took the stage at 7:30 p.m. sharp for a group of fans singing “Happy Birthday” to frontman Jim James and drummer Patrick Hallahan.

A younger generation lined and shrouded along the North Street sidewalk waited to be vetted for security from the Molchat Doma show inside WOMH and were lulled into James’ impeccable vocals for free. The quintet performed to songs spanning their vast catalog that would have appeased the most hardcore MMJ fan. When the band weren’t rocking the block, the reverberation of James’ vocals and Carl Broemel’s slide guitar emanated a spacey, fluid vibe on many songs.

The timing of “Victory Dance” may have been coincidental or brilliantly planned in that the sun dipped below the trees while James sang the chorus of “Hope to watch the winner dance in the evening’s couching sun”. As the night sky darkened, the stage lights began to become more pronounced and the mood changed from a daytime festival stage to a standard one.

Interestingly, the cover of the band’s self-titled LP featured prominently on Hallahan’s bass drum and it seemed like the light appearing there would change from song to song, indicating which album the particular song came from. . For example, a shade of blue, the dominant color of the cover of Zlit up the drum when “Wordless Chorus” was played and a deep shade of green covered it during “Victory Dance” by Circuit.

Drummer Patrick Hallahan and bassist Tom Blankenship are the foundation of MMJ’s groove.

A setlist change from night to night is a tactic few artists use these days. Often, fans can check out a band’s setlist online and find out exactly what’s going to be played a month or more before it’s played live in front of them. More artists should do this to prevent their art from becoming stale for themselves and the fans.

James and his team went through their hits and refrained from joking between songs. But any conversation from the leader to the crowd was filled with sentiment about Houston being a wonderful place and his thanks to everyone who was there for coming.

The band’s instrumental precision was on point throughout the evening, but really stood out during the encore of “Touch Me I’m Going to Scream, Part 2” when in the middle of the song, the music fades to near silence, then comes back intensely to complete the song.

The White Oak Music Hall lawn is arguably the best place to catch a concert in town, especially on a sunny day. Along with top notch sound and lighting, the show sold out almost to capacity and there was plenty of room to move around with multiple places to grab a quick drink and plenty of bathrooms. The midweek show was perfect all around. MMJ played superbly for two hours and 20 minutes and went home to watch the Astros’ final innings.

Personal bias
It Still Moves played in the background as I courted my future wife as I sat completely stopped in I-10 traffic between Houston and San Antonio. The band has a special place in our hearts.

2022-04-28
Previous Post: You can win a chance to go to the Barefoot Country Music Festival
Next Post: FDA to announce plans to ban menthol in cigarettes and cigars