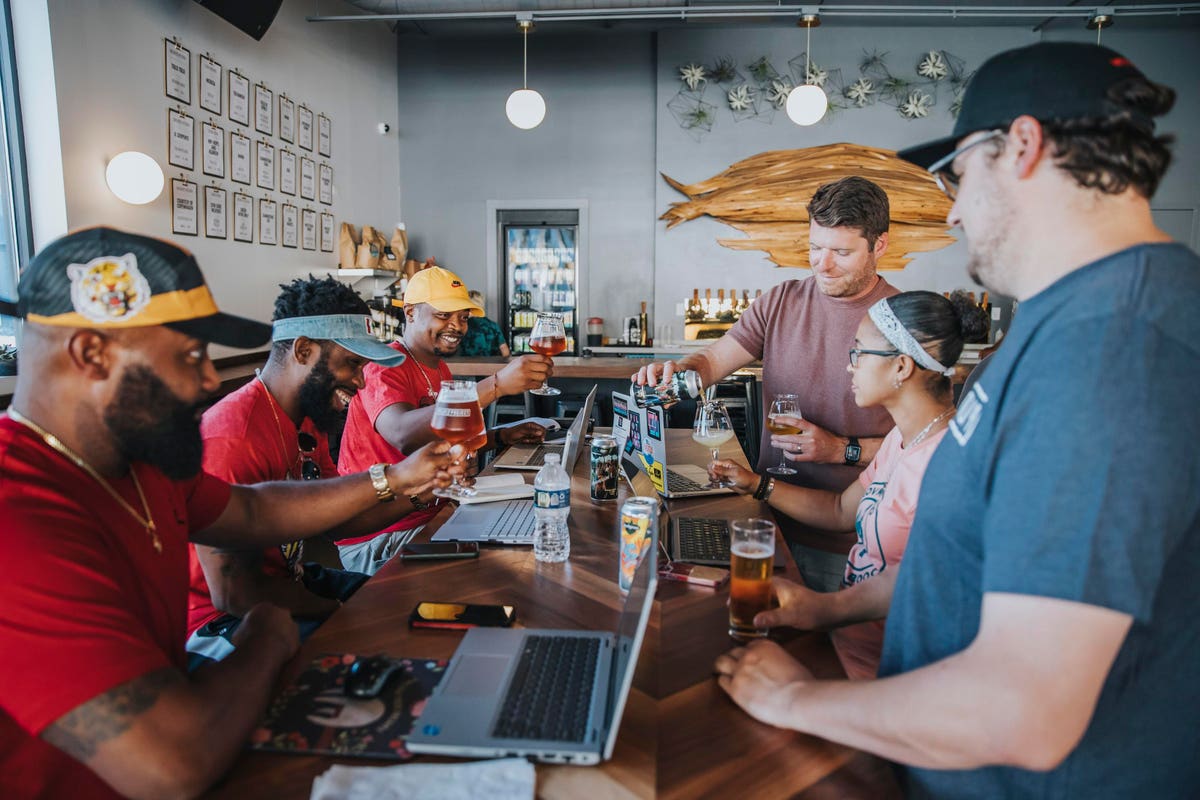 Dan Abel and Jordan Radke discovered an unusual disparity six years ago: it was easier to get into creative fields like music or photography than to start a brewery.

Abel, who was previously a musician, and Radke, who had been in photography, realized that music and photography had built-in help for beginners. “I made the whole move to LA without a dollar in my name to pursue my dreams, and as a singer-songwriter, but I had a wealth of resources,” Abel says. “If I wanted to book a tour, I worked with a manager and an agent. If I wanted to record, I worked with a recording studio and a sound engineer. The risk of me jumping headfirst into the industry of the music was toned down by the available resources.

After two years in Los Angeles, Abel was drawn to the business side of music, and he eventually found himself in the Midwest in 2016, working for Reverb in Chicago. It was there that he reconnected with Radke, his childhood and college best friend, and the two began brewing beer in Abel’s garage. “We quickly realized the parallels between the music industry and photography, and we started wondering what it would take to start a brewery,” says Abel. “We quickly realized there weren’t those resources or those brewing incubators.”

So Abel and Radke began researching and identifying everything a potential brewer would need, and putting them together, they established the Pilot project in Chicago in August 2019.

“We started with five brands to incubate, and four were beer and one was hard kombucha,” says Abel. “We knew our concept would take some work for the public to understand, but the brewers, who were our primary focus, immediately caught on.”

Julie Kikla, Lake Tahoe adventurer and kombucha enthusiast, is a brewer who immediately understood the concept. After a long weekend of skiing and hiking, Kikla was inspired to create her own brand of kombucha, but quickly realized that the establishment ROVM Hard Kombucha would be difficult.

“When I realized the capital and the time it would take to get ROVM off the ground, I felt like a non-starter,” she says. “The baseline was unreasonably high, and there was no way for me to comfortably validate an entirely unique product in a youth beverage category with no more data than friends and family.”

Kikla reached out to Pilot Project at the start of the pandemic in 2020, and they started working with her. “Without Pilot, we would never have been able to go from ideation to launch, let alone growth,” she says. “There were too many roadblocks. Their support and expertise helped transform ROVM from a backyard stand into a fully competitive, award-winning craft beer.

In the nearly three years since the pilot began, Abel and Radke have successfully launched 13 brands, including five women-owned businesses, Chicago’s second black brewery and an Indian-inspired brewery. “With each brand we launch, our network grows and each of our new brands builds on the shoulders of the brands that came before them,” says Abel.

A successful launch, says Abel, is to get the brewer to the 1,000 barrel mark. “When we first launched Pilot, it took between nine months and a year to get there, but today we can get them to that point in about six weeks. “Once you hit that benchmark, you’ve surpassed our system,” says Abel. “With our incubator, the goal is to put you in your place, if that’s your goal, or to have a subcontractor, if that’s your goal.”

“For us, Chicago is our test market,” says Abel. “It’s a tough market, it’s (known) as America’s craft beer capital, so we knew if we could validate this concept in this city, then we would have brought it to other markets.”

The pilot project is raising funds to do just that – to scale its brewery incubator concept nationally and even internationally. “We would like to launch 50 unique ideas every year,” he says.

Funkytown Brewery is one of Pilot Project’s most recent successes. Rich Bloomfield became friends with Zack Day and Greg Williams at Oak Park School, and the three later attended Grambling State University together. In 2017, they started brewing at home, with the goal of creating their own brewery. “We wanted to bring a black brewer’s perspective to the beer industry, which is less than 1% black-owned,” says Bloomfield.

The three friends started working with Pilot Project in mid-2021 and then launched Funkytown Brewery in October 2021. They couldn’t afford to produce a large-scale beer,” says Bloomfield. “The pilot project filled all the remaining gaps.”

“They helped us enter a competitive market with a professional presence that we couldn’t have achieved on our own or with a traditional contract brewer,” he says.

Within six months, Funkytown grew to over 200 retail partners in the greater Chicagoland area. “Pilot Project is like a brewery in a box,” says Bloomfield. “You bring your vision, your product, your marketing strategy and your courage.

“Then you open the pilot project box and have a sales team, a distribution network, a public relations team, business consultants, marketing consultants, brewing equipment and knowledgeable employees serving your beer on tap.

“In our most ambitious dreams, we did not expect such rapid growth.”