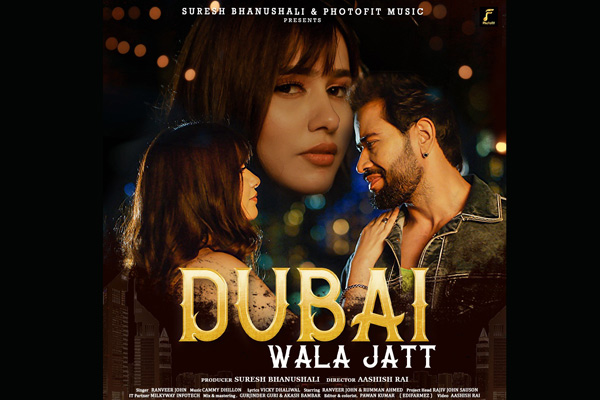 Photofit Music brings “Dubai Wala Jatt” to the floor with a scouting backdrop in the voice of Ranveer John, featuring Rumman Ahmed

MUMBAI: If you are looking for that Desi Jatt vibe, then “Dubai wala jatt” is the perfect song that sets the mood for you. Feel the aura of the desert; falling in the styles of singer Ranveer John, with the magnificent Rumman Ahmed released by producer M. Suresh Bhanushali and Photofit Music.

The song “Dubai wala jatt” is shot against the backdrop of the desert, increasing the warmth and bass of the music in this song. The tune is a pure visual treat, shot in the party setting aligned with the Punjabi essence within it.
Mr. Rajiv John Sauson, photofit music project manager adds, Like the song, “Dubai Wala Jatt” produced by Photofit Music spotlights the rave duo, and the crowd can clearly anticipate a lot of Glitz and Glamour. This toe-tapping number was illustrated with tasteful current ideas leaving this knockout experience, portrayed by director M. Aashish Rai. The Photofit Music label has this time pushed an envelope with this new Punjabi track “Dubai Wala Jatt”. Previously, the singer gave his voice to the other Punjabi song Luteya Jave Na, with heartbreak theme, produced by Mr. Suresh Bhanushali.

Punjabi Music Industry is the second largest music area in India. Incredibly ambitious in sound and scope, it raises the bar for the vanguard of Indian hip-hop, highlighted by Photofit, Mr. Rajiv John Sauson.
High-paced music is incredibly different in scope. Phrases of Punjabi songs have been greatly influenced and more recently Punjabi artists who have gained popularity due to their content and communication, says Amit K Shiva, Director of Photofit Music.

The name of the records, Photofit Music has created some significant hits, Since oldie but a goodie, the melodies “Mashallah” “The Haters”, “Chand”, “Ankhya ka Kajal” and different tunes like “Ganpati Bappa Morya”, ” Teri Patli Kamar” coordinated by Amit K Shiva, Photofit Music, and produced by Mr. Suresh Bhanushali and Photofit music. This deep song ‘Dubai Wala Jatt’ delivered by Mr. Suresh Bhanushali and Photofit Music will contact and create this energy, provoking you Bring back the party mood to relax with super cool beats and cadence music.

From the best food and relaxing energy to the perfect music playlist, what’s better than celebrating with companions?

Listen to the amazing track “Dubai Wala Jatt” by creator Suresh Bhanushali under the Photofit Music pennant. Celebrating is undeniably fun, so why not keep the party going with this song and play it while you hit the dance floor. Let the fun roll, says Mr. Rajiv John Sauson.

The weekend doesn’t mean that just sitting on the deckchairs always means partying, so never pass up an opportunity to dance!

2022-03-08
Previous Post: Universal Music Group announces the suspension of its activities in Russia
Next Post: Report: How women around the world are discovering new music