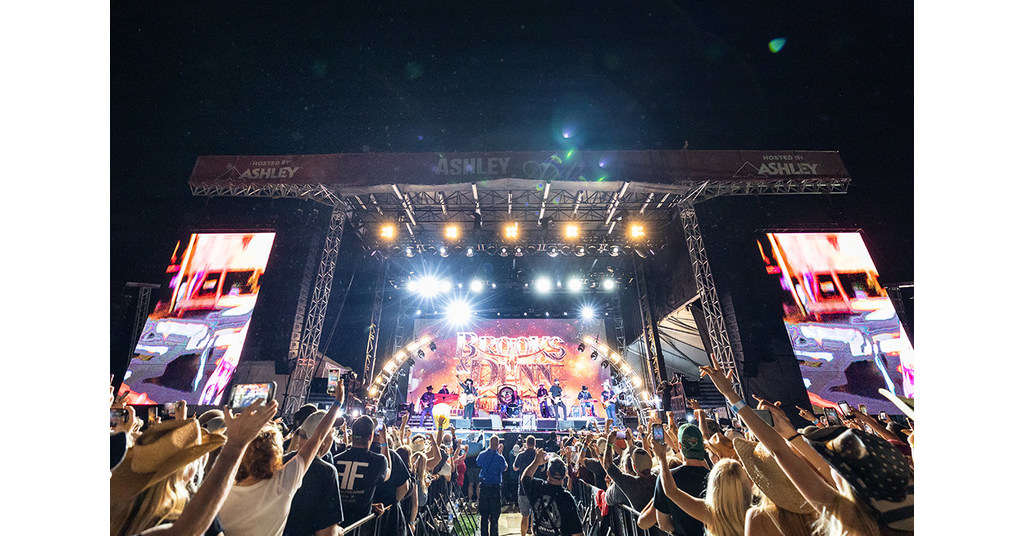 Music, art and family fun at Ashley for the Arts raises nearly $650,000 in donations to more than 70 area nonprofits

ARCADIE, Wis., August 22, 2022 /PRNewswire/ — It was a successful weekend at Arcadia at Ashley for the Arts which took place August 11-13. The annual three-day music and arts festival welcomed tens of thousands of fans with an array of entertainment, arts and crafts vendors, rows of food vendors, a bouncy park, a lumberjacks, street performers, fireworks and more! The organization announced last week that more than 70 nonprofit organizations that participated in the event will benefit from nearly $650,000 donated by Ashley for the Arts.

“It has been an incredible year filled with an abundance of activities for the whole family,” said cole bawek, event director. “As soon as you stepped onto the grounds, you were greeted by an artsy vibe throughout the 54-acre memorial park and exceptional musical lineups. Ashley for the Arts’ mission to showcase the arts and to support humanity was a true description of the weekend!”

Thursday night’s launch event hosted performances by Chris Kroeze, Arch Allies, and Tuned Up, plus new activities including fireworks and a Glow Run. Hundreds of participants dressed in neon colors and bright accessories to run for a cause, where they crossed the finish line in a pool of shiny green foam. Proceeds from the Pursuit of a Cure Glow Run, charity raffle and luminary sales support the advancement of medical research and help offset medical expenses incurred by cancer patients.

Even with overcast skies throughout the weekend, Friday and Saturday brought steady and enjoyable crowds. Memorial Park Drive was lined with nearly 100 arts and crafts fair vendors, all showcasing, selling, and some even demonstrating their skills and artwork. Timberwork’s Lumberjack Show held six shows, performing art straight out of from Wisconsin Northwoods Logging History. The other half of the catwalk featured host sponsor, Ashley Furniture”Ashley area“, which highlighted a wide variety of corporate social responsibility initiatives from the company; Heartworks, City of Hope, Trempealeau Valley Co-op’s mobile skills lab, Ashley’s Angels, conservation efforts, Wreaths Across America and local middle and high school robotics teams.

Both ball diamonds hosted fun for kids and families, including the bouncy park that got the kids bouncing, interactive do-it-and-take-home art projects, a petting zoo full of furious friends, BINGO, larger-than-life tic-tac-toe, and more. – all of this was included in the low cost weekend admission.

The rest of the vibe held Friday and Saturday included street performers, balloon performers, a circus trio variety street show, Painting in the Park with Cheers Pablo, 11 local school performances and three side stages full of music and family entertainment. Throughout the park, food vendors from near and far served tasty snacks and meals to thousands of hungry festival-goers.

Ashley for the Arts sends a big thank you to all the fans who came out and supported the cause, helping to raise a significant amount of money for the community and benefiting the event. With the support of the event’s host sponsor, Ashley Furniture Industries, and numerous community and corporate sponsorships, Ashley for the Arts was able to provide affordable access to music and the arts throughout the weekend. Plus, it took nearly 4,000 teams of volunteers to organize this one-of-a-kind non-profit event. Thank you to everyone who volunteered and to all emergency and security services personnel for their assistance.

Ashley for the Arts is a non-profit initiative that provides the whole family with world-class entertainment, art, exercise and family fun for a remarkably low cost. The organization is one of from Wisconsin largest charity events, donating more than $3 million since its inception to more than 70 non-profit organizations, including participating schools, children’s charities and medical research. This music and arts festival was conceptualized and created by Ashley Furniture Industries in 2009 and takes place at Arcadia, Wisconsin Memorial Park.