Melco, the Japanese maker of the N50 music library featured in this review, isn’t a household name among American audiophiles. Veterans might remember the Melco 3560 turntable, considered extravagant when it was launched in 1978, in part because it supported three tonearms. Confusingly, several subsidiaries of the giant keiretsu Mitsubishi are called MELCO (for “Mitsubishi Elelectric Corporation”), but the manufacturer of the N50 is not one of the those MELCO. This “Melco” is more of an abbreviation for “Maki Engineering Laboratory Company”, and although it got its start in hi-fi, its best-known products today are network-attached RAID arrays manufactured by the American division of Melco, Buffalo Americas.

Melco’s audio division, known as Melco Syncrets, sells products similar to those produced by Buffalo Americas but suitable for hi-fi, including servers that integrate all the digital elements that benefit from being in a single box. The new N50 only lacks a DAC to be a complete digital source.

A digital audio front end has many parts, and in the age of streaming, those parts can be put together in different ways. It starts with a digital audio file, stored locally or anywhere else – anywhere else on the entire internet – and ends with a DAC. The trend among audiophiles and manufacturers is to optimize every step of the process. Start with NAS drives, servers, or streamers, and progress through digital-to-digital converters, network audio devices, USB reclockers, isolators, and signal conditioners, all perhaps with upgraded power supplies and power links. connection optimized, and end up at a versatile, high quality DAC with jitter rejection. It evokes an audiophile’s nightmare, Achilles’ paradox and Zeno’s tortoise for the modern audiophile.

Eventually, hopefully, the data will become music and end up in your ears. But as the complexity increases, the cost also increases and the risk of incompatibility setting in increases. This is part of the challenge of digital audio streaming.

There’s another part: many audiophiles have vast libraries of ripped CDs and SACDs and hi-rez music downloads, and these days most subscribe to at least one streaming service. Somewhere in the front-end there must be an application that manages this library and allows easy access to music.

A clean and simple appearance
Upon unboxing the N50-S38 ($5499, footnote 1), I was impressed with its clean, simple appearance. Starting from the left of the front panel, Melco’s distinctive brush font logo sits directly above an on/off button with an LED indicator. To the right are a USB 3.0 port – you can insert a USB stick full of music here, for playback or to transfer to the N50’s SSD – and a central alphanumeric display. The four small buttons further to the right are used to navigate through the commands and the configuration menu (Back, Menu/Enter, Up, Down). On the rear panel, from left to right, there is a USB 3.0 port optimized for sending music data to a USB DAC and then three other USB 3.0 ports, intended for connecting an optical drive (not supplied) for ripping and playing CDs, a USB drive port for library expansion and a backup drive. To the right of the USB ports are two RJ-45 Ethernet ports, one for connecting the Melco to your local network, the other a direct output to a network-capable “music player” – more on that later. Finally, there is an IEC power connector (footnote 2).

In the complex world of modern digital interfaces, it can sometimes be difficult to determine the role played by a particular component. Melco calls the N50 a “digital music library” or, sometimes, a “music and stream store”. Neither term told me exactly what to expect. Even after reading the Quick Setup Guide, which identifies all the controls, connectors, and menu/display operations, I still didn’t know how to get it to play music. Downloading the full user manual from the Melco website pointed me in the right direction, with detailed descriptions of every operation and function. Some mysteries remained.

Along with the manual and an iPad, I found the N50 provided almost everything needed to stream local and web music. The front panel controls and small, very readable alphanumeric display worked well for setup and basic music selection, but I quickly realized that using a tablet—iPad only; there’s no Android support, and the Melco Music app (footnote 3) is key to making music selection easy and the Melco enjoyable to use.

Playing of the N50? At the heart of the N50 is a custom Melco circuit board. Its job is to grab the music files, either from the rigidly mounted internal SSD, or from other sources, and send the output directly to a local DAC via the USB Type-A port on the PCB or to the dedicated Ethernet port which connects directly (not, as with most of these devices, via a network switch) to the Ethernet connection of a networked DAC. Everything (hardware, firmware, outputs) is tightly controlled by Melco.

There are many ways to listen to music with the N50, but the simplest and most obvious is to load music files into its internal memory and connect a USB DAC to it. You can load the SSD in different ways. Using the USB 3.0 ports, you can connect an external hard drive, SSD or flash drive full of music files and import the files. What I did was even simpler: once the N50 was connected to my local network, I accessed the N50 with my desktop computer. From there, I dragged and dropped files from my primary NAS storage directly into the N50. Over 12,000 tracks loaded smoothly and occupying less than 8% of the N50’s internal memory. Next, I connected a Mytek Brooklyn+ DAC to the N50 via Melco’s dedicated USB output port.

I was immediately able to play any of the files stored on the SSD using the N50’s front panel controls and display, but no one would want to use the machine that way: it’s bulky and it there is no album cover. Obviously, an iPad is the way to go. So I installed the Melco app on the iPad and connected it to my Wi-Fi network. It immediately “saw” the N50, so I selected it (along with the USB connected Mytek DAC) as a device to “play” on and as a “library”. I could then access the library, organized by album, genre, artist, etc. Navigation was easy.

I sampled all supported file formats except AAC to confirm that the N50 would handle them. It does, including MQA, although it’s not listed as a supported format. For DSD, the N50 has three user-selectable playback modes. “Standard Mode” plays DSD as native DSF/DFF if your DAC supports it; otherwise, DSD files will play as DoP (DSD over PCM). “DSD over PCM Priority Mode” plays all DSD content as DoP, even if your DAC supports native DSD. “PCM mode” forces conversion from DSD to PCM, for use with DACs that do not support DSD at all. 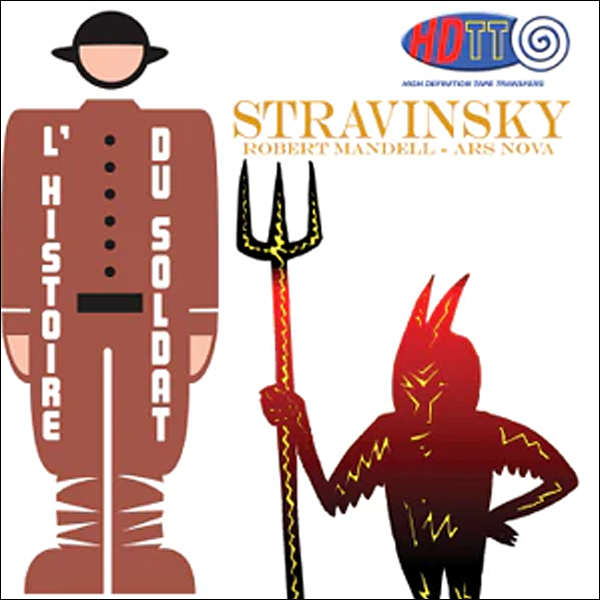 Among the files I copied into the N50 library was a classic Stravinsky recording The Soldier’s Story recorded in 1956 by Westminster Records, with Robert Mandell conducting Ars Nova (an all-star ensemble) and Stanley Drucker and Herbert Sorkin playing the crucial clarinet and violin parts respectively. This is a transfer from a two-channel tape to digital (24/96 FLAC High Definition Tape Transfers HDTT10464, footnote 4). It’s a spectacular performance and recording. There’s no dialogue to distract from the music, and the recording captures the instruments vividly, accurately and closely. Played by the N50 through the Brooklyn+, HDTT’s 24/96 FLAC files provided one of the most compelling “they’re here” experiences I’ve had with classical music.

The Melco N50 is a networked device, so when connected to my local network, the “Library” choices in the Melco app included all devices on my local network, including my exaSound s88’s small library and my server JRiver, which in turn has access to everything on my NAS. The NAS was of course directly accessible, but only after installing MinimServer on the NAS, a simple procedure. I was able to play any track I had anywhere, sometimes in more than one way.

Footnote 1: S38 denotes the specific model of N50, with specific processor and storage. The S38 includes 3.84TB of storage space on an internal SSD.

Footnote 2: Also, at the bottom of the rear panel on the far right is a simple unlabeled screw described by the manual and quick start guide as a “grounding port”. Its function is not mentioned, but it is presumably to deal with any buzzing that may occur. I haven’t experienced it.

Footnote 3: Or another non-Melco application.

2022-06-01
Previous Post: Heineken’s leading beer brand in Asia is now selling fastest in Nigeria
Next Post: Roots of KK Delhi University before it rose to fame