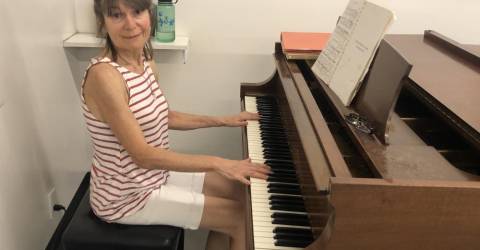 Colleen Jones is an accomplished and experienced ballet accompanist. She has worked for many dance schools, the most notable being Ballet Academy East, also known as BAE. As an accompanist, Colleen is able to offer advice and ideas on how to succeed in the music industry in areas or ways that would not occur to most people.

What do you do as a guide?

As an accompanist, I play live music for dance lessons ranging from 45 minutes for young dancers to an hour and a half for adults. My job is to provide live music to meet the musical needs of dance teachers and students in the class. That’s my goal: to serve them, to help them move around the floor and to help the teachers present and demonstrate their techniques.

Where did you study the piano?

I studied piano as a child at home and later in college, earning my Bachelor of Music. Later, I studied jazz privately with Gary Diel at the Manhattan School of Music and became very interested in the genre. The artistry of jazz musicians in New York clubs such as Blue Note and Village Vanguard really inspired me to study jazz. New York also has the best Broadway productions in the world and I really learned a lot enjoying those productions.

How did you know you wanted to be a musician?

I was raised in a very musical household and studied classical piano as a child before earning my Bachelor of Music. I started playing the piano in restaurants and was part of a jazz band. I became a guide in 2008 and it has been my job ever since.

How did you become a guide?

A friend of mine asked me if I had ever thought about performing for dance since she was a dance teacher herself. She invited me to attend one of her classes to see what I thought, and in that class Michael Cherry was playing. Michael Cherry is incredibly talented and is known in the dance community as an accomplished accompanist. He has a wonderful, soothing touch and I saw how he observed the movements at the barre and the energy he played with when the leg lifts or with pirouettes and I thought that was amazing. I really enjoyed that.

Michael Cherry suggested that I start with the young dancers division as a beginner. I started in 2008. Over time, I became more comfortable and was able to find the right tempo and repertoire, especially for adult classes, because the tempo and style of adult classes are more specific. Eventually I got more comfortable with it and had more fun with it. There’s nothing I’d rather do.

What is your favorite part of your job?

At Ballet Academy East on the Upper East Side, the school I’ve worked the most for has many different age groups. Young dancers, for example, start very young, at 18 months. Playing for them is always fun as toddlers sit with adults in a circle. The young dancer division goes up to age six and after that they have the “primary and enrichment” division.

One of the reasons I like working with BAE is that they are so organized and the pre-professional division is so focused on technique and discipline, they follow the program, and it’s very inspiring. Director, Julia Dubno, has created a dance school that not only connects with the community, but inspires young dancers to a professional level of dance.

Another thing I really like is playing for adult classes because most of the time those classes mean the world to them. They work full time and look forward to their ballet class. Through these classes, my music can help motivate them, the teacher can direct them, and we work as a team to get them excited about dancing.

Watching the teacher’s direction as we work together in the studio, I feel like I’m part of a team that inspires dancers of all ages to become the best they can be.

When choosing the music for different routines, do you play specific pieces or do you improvise?

Some of the music is set for the different levels and divisions. For example, the pre-professional division requires a very specific type of music. For modern or tap lessons, I can play tunes from Broadway shows, a catchy jazz style, according to the teacher’s requests. Classically trained, I also integrate jazz, tango, flamenco, pop and Broadway tunes; it’s really about what the teacher wants and what the dancers can understand in the music.

What advice would you give to someone interested in becoming a coach?

There are different CDs available with different repertoires of pianists to help new accompanists learn which repertoire to use. Some music books are also available, including Steven Mitchell’s book, “From Tots to Teens”.

Attending live lessons to see barre and center routines will help the new coach with tempos and style of music for particular moves.

But just like becoming a dancer, with practice and hard work, it’s so rewarding!

Lea Efran is a rising New York high school junior. She plays volleyball, does jiu-jitsu and is a Stone Soup Magazine winner.