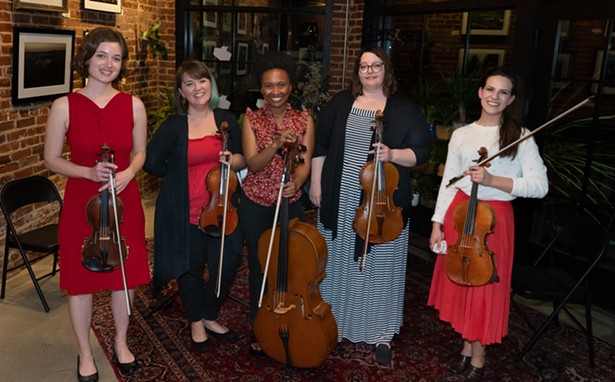 Lay it down like it’s hot | Music | Weekly styling

A thrilling combination of classic sounds and engaging hooks, the song is both immediately accessible and continually surprising. It’s the perfect springboard for Richmond string quartet Rosette’s latest So Hot Right Now series, which features five concerts of Bunch’s music across five venues. [the first performance already sold out on March 6 at the Richmond Art Garage].

“The intention is to give the audience an instant taste of his style and leave them wanting more,” says Rosette violinist Ellen Cockerham Riccio.

Viola player and composer Bunch is the perfect target for Richmond’s multi-genre string quartet. His mix-master works mix styles ranging from baroque to hip-hop, spiced with the unmistakable flavor of bluegrass. The foundation remains classic; there is not much viola tradition in any other genre. But the way the music is played – with percussive bowing and finger drumming on the instrument – turns into a percussive groove all its own.

Riccio knew Bunch from their shared roots in Portland, Oregon. “I had heard his name, but I hadn’t really heard his music,” she says.

All that changed when a violist performed Bunch’s solo “The Three Gs” during one of his performances of the Classical Incarnation series of free chamber music.

“I just thought it was so cool,” she recalled. “I had this big stupid smile on my face the whole time they played. It’s so rock and groove and do things that you didn’t think a viola could do and be.

After the solo overture, the quartet steps out to play “Apocryphal Dances,” a playful, self-aware meditation in a melodic architecture airy enough to let modernity slip through.

“[Bunch] writes that it’s just meant to be 12 minutes of clean good fun for an audience and a musician,” says Riccio. “It’s not strictly in the style of 17th-century French dance music, but it’s inspired by it. He mixes styles in a truly incredible way, adding a blues chord, a bit of jazz rhythm or the dissonance of modern pop music.

The five-part, 15-minute piece begins solemnly before lighting up in a Provençal folk dance and then, in the third section, evoking Celtic longing. Fiery plumage propels the next section with Appalachian-tinged leaning over repeated drone. The finale has the dazzling certainty of a Mozart piece, albeit spiced with galloping unconventional percussion on the back of the viola. It’s such a charming piece that it’s surprising that before this session the only public record is the 2017 premiere performance of the 49th Parallel in a church in Portland.

“The score was not published at all until I asked to perform it [for] this series,” says Ricco. “[Bunch] said: ‘I’ve wanted to do this for a long time and this will finally give me a reason.’ So that’s pretty cool.

The final piece, “String Cycle”, brings together Rosette and Burke with doubled violins and violas. “If you know classical music, you know that the best music is written for quintets,” says Ricco. “The extra viola adds so much.”

“Cycle” is inspired by Bunch’s experience in a bluegrass band. While studying at the Julliard School in New York, he answers a classified ad looking for a violinist. “At the time, he had no experience with styling,” notes Riccio. “But he was the only person who auditioned who had his own violin and could read music.” So he learned on stage, from the inside.

Reflecting this immersion, “String Cycle” begins with bluegrass fiddle, moving in the next movement to Texas swing. Then there is a percussive pizzicato “Porch Picking” section, where the melody notes move from player to player before transitioning into contrapuntal vocals with the viola briefly strummed like a ukulele. The finale is an explosion of intense and joyful funk.

Because it is unfamiliar but highly engaging music, each piece in the hour-long program is relatively short and logically focused. Repetition of performances is not just for larger audiences, but to allow for repeat attendance. “That’s the big experience of this series,” Riccio said.

Unless you know these composers, it’s still music you don’t know.

“It’s pretty exciting to see people coming for the first time, because they really don’t know what to expect, but it’s great that they’re interested,” she says. “Then by doing the same thing several times, people can have another chance. Your mind can relax as it has an idea of ​​what is coming. You start looking forward to your favorite parts.

There’s a common misconception that music was smoother and more distinguished in the past – as if the past were a faded version of the present. But in an intimate setting, chamber music has the punch of heavy metal and an emotional resonance all its own. There are many chances to hear Kenji Bunch’s modern take on the form, in big theaters in March. Based on the brilliant debut, missing them all feels like neglect.

Here are the remaining performances: