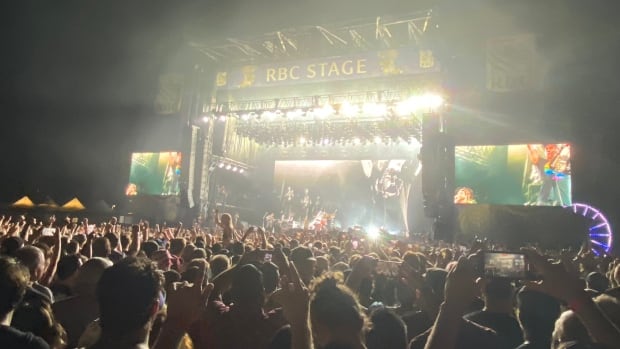 ‘He didn’t miss a beat’: Music fans flock to Bluesfest after pandemic hiatus

When Rage Against the Machine took the stage at Bluesfest on Friday night, it was the symbolic culmination of two years of anxiety and anticipation for fans and festival organizers alike.

That’s when general manager Mark Monahan said he felt the excitement of a crowd that hadn’t seen live music on this scale at LeBreton Flats since 2019.

“It was just such a pent-up request for them,” he said. “You just felt the excitement walking into the doors that this was going to be something really special.”

With bands like The National and The Beaches set to wrap up Bluesfest’s 10-day schedule on Sunday, Monahan summed up her feelings about seeing the festival unfold in one word: relief.

“We’ve planned a lot of things over the past two years, a lot of which we haven’t been able to do,” he said. “So planning our regular event and being able to pull it off has been a huge relief.”

The festival was canceled in 2020 following the COVID-19 pandemic, then relaunched in a much smaller, all-Canadian format at Lansdowne Park in 2021.

That hiatus led to a few bumps at the start, Monahan said, including long lines and the need to bring new volunteers up to speed.

“The only advantage is that we planned this event for 2020, so we had three years to plan it,” he said with a laugh.

By the time ticket sales are counted, Monahan estimated the festival will have attracted between 250,000 and 300,000 fans, comparable to years past.

We’re still a bit speechless, so suffice it to say that tonight was one for the books. We will be revisiting this day for many years to come! Thank you for sharing it with us 🙌 More pictures to follow but it’s a small sample #ICYMI ! pic.twitter.com/HeD0iHpnei

According to festival organizers, around 30,000 of those tickets went to Rage Against the Machine fans, some of whom kept tickets they redeemed in the spring of 2020.

Attendees waiting to enter the grounds on Saturday night said they were delighted with the festival, the food and the screaming fans were back.

Rob Bennett was among those in line, although he was more used to being on stage with his band The Bushpilots.

A Bluesfest regular, Bennett said he’s been coming out for more than 20 years and rarely misses a day.

“It was really great hanging out with my friends…sipping beers, soaking up the late afternoon sun, just basking in the warm festival glow.”

Despite the fact that COVID-19 is still prevalent in the community, Bennett – who said he received four doses of the vaccine – didn’t hesitate to come out.

“We’ve been locked up for a really long time and it kind of picks up where we left off,” he said. “It’s a calculated risk to enjoy life.”

The festival comes as several COVID-19 indicators are on the rise in Ottawa, including hospitalizations, outbreaks and levels of coronavirus in the city’s sewage.

The region is in the seventh wave of the pandemic, and health officials said last week at the start of Bluesfest that it was “strongly recommended” that people wear a mask in crowded outdoor venues such as the festival.

Due to high levels of COVID-19, wearing a mask is strongly recommended in indoor public spaces and crowded outdoor gatherings. If you are attending a summer event or festival this weekend (#RBCBluesfest2022), please use your protective layers. https://t.co/0Ytty4P3ME (4/5)

Monahan said he and other Bluesfest organizers have been closely monitoring public health and provincial guidelines.

They decided to hold an event where people can feel safe listening to music wherever they are, he said, and asked spectators to reduce their level of risk.

As Bluesfest 2022 draws to a close, Monahan said her thoughts are already turning to next year and what it will look like.

“The fact that we were able to pull it off and be back is just a huge sense of accomplishment,” he said. “And that sort of leads to…trying to get back to normal hopefully within the next two years.”