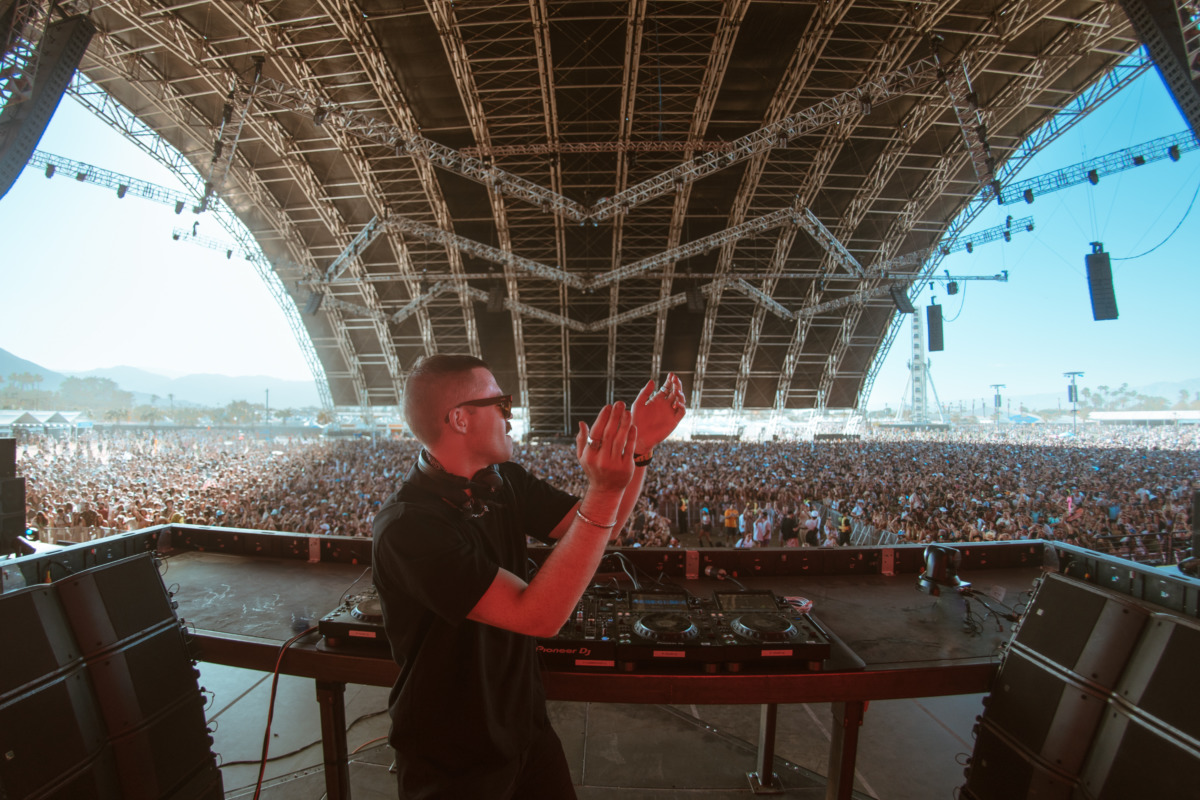 Dom Dolla proved to be an undeniable star during Coachella’s memorable return to the Empire Polo Club on April 15. Weekend 1 saw the ARIA-nominated producer captivate a jam-packed Sahara tent on the opening day of the festival. As well as incorporating an array of crowd favorites into his set, the veteran DJ confirmed dancing astronaut that its set opener, a sought-after ID by the name of “Miracle Maker,” will officially land on streaming services in early July. Not only dancing astronaut‘s Breakout Artist of 2019 is triumphantly dominating the Sahara stage, he also teamed up with our Breakout Artist of 2021 John Summit for a surprise back-to-back set at Do LaB to close out Coachella on its final night of production. Dom Dolla sat down with dancing astronaut to discuss the new single, his upcoming tour, and more. Read the exclusive on-site interview below.

You haven’t cemented your first single of 2022 yet. Can you preview a potential release?

Dom Dolla: “I believe it’s going to be [released] early July, while I’m in the UK during Parklife [Festival]. It is called “Miracle Maker”; it’s a record that I’ve been playing in my sets for about six weeks, and it shocked me how well it does. I’m very excited to release it there.

You’ve been producing tech-house inspired records for quite some time. What do you think of its recent mainstream emergence in the United States?

Dom Dolla: “I love it, man. I’m not someone who really tries to protect genres from bastardization. Personally, I like when things expand because it means things get more complex and interesting. And people’s tastes are getting more underground and more subtle I remember hearing Jamie Jones [get] asked, maybe seven or eight years ago, ‘what do you think of the explosion of dance music in America?’ And he said, “what excites me the most is when 18-year-olds aren’t into mainstream EDM, but they’re into underground house and techno.” And it is happening now; in Australia, in the UK, even here in the US, I’m playing shows to groups of kids who are getting younger and younger, and they’re getting more and more excited about the genre.

What excites you the most about playing Coachella?

Dom Dolla: “[Because] it’s a festival icon, it’s a statement for where you stand as an artist in pop culture. Seeing house artists represented on such huge stages here is proof of that; it shows the tipping point of a genre. I’ve been to Coachella about four or five times; there are a lot of Australians who come here, and it’s definitely on my wish list to be on the iconic Coachella poster. Performing on a stage like Sahara is quite honestly a dream come true.

You have a slew of international tour dates ahead of you. In which cities are you most looking forward to performing?

Dom Dolla: “I know it’s in the States, but it has to be Red Rocks. I’ve never been. I had many friends who played there; my friends Gorgon City played last night, Rüfüs, Flume… So many brilliant and creative Aussies have performed there. It’s like the pinnacle. like where are you going [from there]? There’s Brooklyn Mirage, Red Rocks, Coachella, there’s EDC… The escalation point beyond playing those is playing multiple of them, which is a testament to how amazing those shows are. For me, that’s what excites me the most, Red Rocks. It’s like the ceiling, man! I’m pumped. There’s a wind that’s turning [in Colorado]; house music is exploding. And I’m really excited to be at the forefront of that.

You recently gave some valuable advice to aspiring DJs on Twitter, “learning how to heat up a dance floor is a skill worth developing.” How did you develop this skill early in your career?

Dom Dolla: “I didn’t really have a choice, man; that’s how I started as a DJ. In Melbourne they take house and techno very seriously and I wasn’t a producer at the time. I’ve been a DJ since I was 15; I’m 30 now. At the time, I didn’t know how to write or produce; I hadn’t really gone into that, but I loved planning a party. When I was little, I remember putting together my favorite CDs, like ‘we should put this on the party, mum!’ DJing was a natural progression from that.

When I was 18, I started running nightclubs in Melbourne, so I became responsible for booking DJs. And I thought, ‘this guy would be good at 9 to 10, this guy is good at 10 to 12, and this guy is good at 12 to 2’. Most of the time, I couldn’t afford to book headliners, so I just booked DJs based on their skill levels and level of programming. If you walk into a club at 9 p.m. and get banged in the face by dubstep, you don’t have time to buy. Planning a party is like a passing train; if the train passes in front of you, you will not get on. But if it’s moving slowly along the platform, you’re like, “I’m going to get on that train.” And then the train speeds up, the party speeds up, it gets more exciting… These days that skill can get lost because you focus so much on being a talented producer. There are successful producers who haven’t had to spend hours as a DJ and, through no fault of their own, have to learn after the fact. This tweet was just encouraging people because it can hurt your career if you hear yourself at the wrong time and play the wrong kind of music.

What was your first DJ controller?

Dom Dolla: “My first turntables were CDJ-800 MK 1s that I borrowed from a friend of mine. He was a rich kid at my school whose parents bought them for him, but he was bored. And I was like, ‘can I borrow these?’ He lent them to me and never asked me to return them, although I eventually returned them four years later. I was obsessed with house blogging at the time, so I was constantly uploading A-Trak, Chromeo, Boys Noize edits… all on blogs like Gotta Dance Dirty. I would download [songs that had] terrible bit quality, like 128 or 192 kilobyte recordings.

What would you say, at 16, of your current situation in your career?

Dom Dolla: “I don’t think he would believe it, to be honest. Honestly, I think he’d be like, ‘Yeah, cool dude… Shoot the other one.’ “