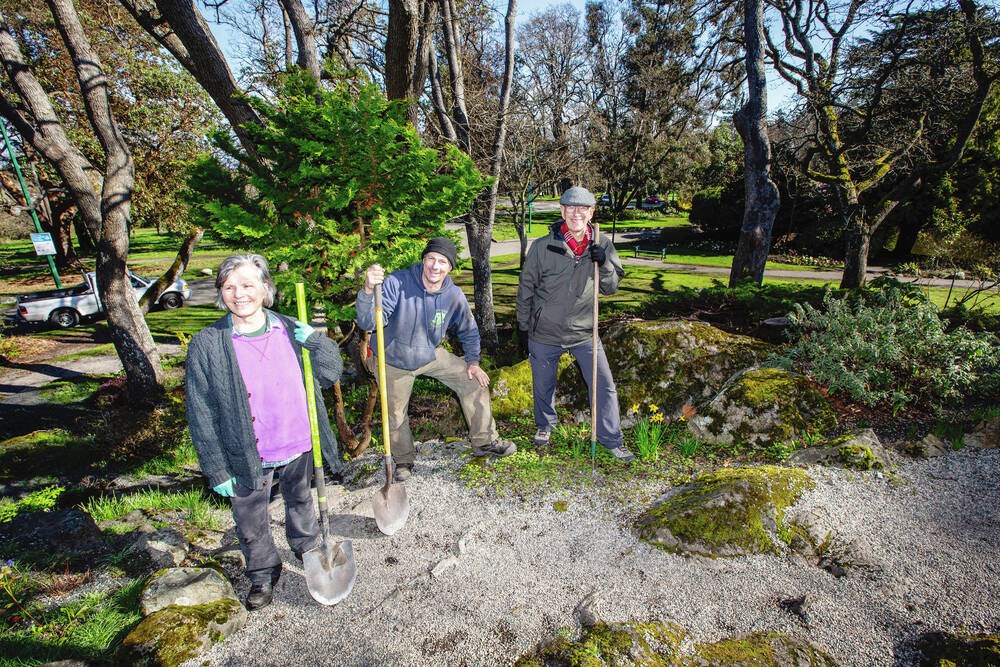 The Vancouver Island Rock and Alpine Garden Society – the oldest rock garden and alpine garden society in North America – celebrates its 100th anniversary with a spring display and plant sale at the Mary Winspear Center on Friday and Saturday.

The society has been active in the gardening community on southern Vancouver Island for the past century. He supported the creation of Thetis Park Nature Sanctuary in 1958 (now Thetis Lake Regional Park), provided plants for Playfair Park in Saanich, and helped rebuild Thomas Francis’ cabin, which burned down after being donated from his forest property to become Francis/King Regional Park on Munn Road.

50 years ago, to mark its first 50 years, the company installed a demonstration rockery in Beacon Hill Park. This year, the company plans to extensively renovate the garden to prepare it for the next 50 years.

The society held its first annual spring exhibition in 1939, the first rockery exhibition in North America. This year’s show will feature the best rock, alpine, woodland and bog plants. It will feature a crevice demonstration, plant sales, door prizes, a silent auction, tea and dinner.

Admission to the spring show and plant sale is by donation. It runs from 1-8 p.m. Friday (the crevasse garden demo is 2-5 p.m. Friday) and 1-5 p.m. Saturday at the Mary Winspear Center, 2243 Beacon Ave., Sidney.

• For more information, go to virags.com and on Facebook.

On Saturday, the BC Maritime Museum is hosting its annual Massive Marine garage sale in Ogden Point.

This is the 18th year for the sale, which attracts dozens of seafood vendors from across Vancouver Island.

“Buyers can expect anything and everything inside, around, outside or related to the boats,” said Anya Baker, events and development coordinator at the museum. “We look forward to seeing everyone.”

Proceeds will go to the operations of the BC Maritime Museum as well as school and public programs. Coffee, hot chocolate and pastries will be available by donation, and a hot dog vendor will be on site. A 50/50 raffle will also take place, with two draws.

The general admission fee is $5. Early entry is $10. Children 12 and under are admitted free.

It will be held at Pier A in the Breakwater District at Ogden Point, 185 Dallas Rd. Saturday.

A second-year business student at the University of Victoria is one of two students to have received scholarships aimed at supporting Indigenous students in their post-secondary education.

Island Savings, a division of First West Credit Union, recently launched a scholarship program. The program awarded $22,000 to 10 students, including a $3,000 scholarship to Madison Downey.

“As a first-generation student who is self-funding, finances are pretty tough and the opportunity to take some of that burden off is incredibly appreciated,” says Downey.

She hopes her studies will contribute to her ultimate goal of making fine arts and theater more accessible to young people and low-income people.

As part of the program, she will be matched with a mentor to help her navigate her studies and give her insight into the business world.

“We want to set these students up for success and while financial support is a crucial part of that success, it’s not the only one,” said Kendall Gross, president of Island Savings. “As we develop the program, we want to support these students to provide them with opportunities for mentorship, education, and perhaps even employment to help jump-start their careers.”

For more information or to apply, go to uvic.ca/registrar/safa/index.php.

>>> The public is invited to report bat activity

The BC Community Bat Program, in conjunction with the Province of British Columbia, is asking the public to report any bat activity observed in the winter and if they find sick or dead bats by May 31.

Biologists are seeking help to detect and prevent the spread of white-nose syndrome, a fungal disease that is harmless to humans but has devastated North American bat populations – populations of some species have declined by more than 90%.

The fungus attacks bats while they hibernate, appearing on their wings and face to give the appearance of a white nose.

The disease was first detected on the West Coast near Seattle in 2016 and has since spread to several counties in Washington state. With the arrival of the disease in southern British Columbia considered imminent, people are urged to be on the lookout for affected bats in all areas.

Two bat species in the province, the Little Brown Myotis and the Northern Myotis, are listed as endangered under federal species at risk legislation. Although there is no proven cure for white nose syndrome yet, several promising treatment options are being developed and it may be possible to lessen the effects of the potential wildlife health crisis, according to the bat program.

The City of Victoria announced a new cultural infrastructure grant program with $400,000 in funding to support upgrades to performance and rehearsal spaces, including upgrades to make venues safer and more accessible for the artists and the public.

“Over the past two years, arts and culture organizations have shown tremendous resilience as they navigate and find new ways to bring programs to the community,” said Mayor Lisa Helps. “The city has lost affordable arts and cultural venues during the pandemic and many of those who remain are in dire need. That’s why we’re making Cultural Infrastructure Grants an ongoing funding program to make places safer and more accessible for everyone.

The program offers funding ranging from $15,000 to $100,000 per organization, depending on the project. Organizations can apply for and receive funding for one project per year.

The city is hosting an online information session at 5:30 p.m. on April 5 for interested organizations to learn more about the grant guidelines. The event will also be recorded and posted on the city’s website for those unable to attend.

The deadline for submitting applications is April 29 at 4 p.m. For more information, visit victoria.ca/EN/main/residents/city-grants/cultural-infrastructure-grant.html.

Thanks to a COVID Recovery grant from the Victoria Foundation, the church was able to provide students at the University of Victoria’s School of Music with the use of the sanctuary as a practice location, she said in a statement. .

“Bringing people back downtown to a historic, acoustically sound location will give the community the opportunity to once again connect with others while listening to beautiful live performances of classical music,” the statement read.

Admission to the show is by donation. It starts at 2 p.m. on April 3 at the church, 680 Courtney St. (corner of Broughton and Douglas streets).

2022-03-27
Previous Post: CYNN: Let the publishing industry die – The Cavalier Daily
Next Post: “Kizz Daniel should be one of the top charts in Nigerian music, but he is the most underrated star” Bobrisky